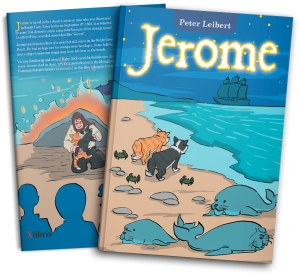 Jerome is based in fact about a mystery man who was discovered in Sandy Cove, Nova Scotia on September 8th, 1863. It is believed by some that Jerome’s name came to be because of the strange sound he uttered that sounded somewhat like “Jerum”.

Jerome was found in front of a rock that still exists on the Sandy Cove Beach. He had no legs and his stumps were bandaged. Some believe that a ship of unknown origin may have left him on the beach.

Various families on and around Digby Neck cared for Jerome over the years. Jerome died on April 12th, 1912 and is buried in the Metaghan Cemetary.

Jerome’s history as presented in this story is largely fiction.

PRESTON, Conn. – On the beach, in front of a rock, in Sandy Cove, Nova Scotia, a mystery man — with unknown origin — was discovered. He was later named “Jerome” because of the strange sound he managed to utter that sounded somewhat like “Jerum.” He had no legs and his stumps were bandaged. The man survived through the help of several families, who took care of him over the years. He later died on April 12, 1912.

Inspired by a true story about this legless, mute man found in 1863, as well as by his two cardigan corgis, Peter Leibert develops his first history-based children’s picture book, “Jerome” (published by Xlibris).

“Jerome” revolves around the friendship built between a lost man and two dogs. In this tale, two corgis, Copper and Andy, are the ones who discover Jerome on the beach. They nurture and take care of the man, eventually revealing his fictional identity.

With elements of magic and mystery, partnered with engaging illustrations, the book — a short but substantial read — relays a lesson about compassion and an inspiring insight about the relationship of people and dogs. Leibert hopes that readers will develop love and interest in dogs and understand the message of compassion he is trying to convey in the book.

About the Author
Peter Leibert lives in Preston, Connecticut, on a small farm with his wife and two cardigan corgis. He is a professor emeritus of art at Connecticut College in New London, Connecticut, where he taught studio art (ceramics) for 37 years and chaired the department of art for 16 years. He plays concertina and button accordion semi-professionally. Leibert is the founder of the Westerly Morris Men.